Singapore: (Where Today is Tomorrow and I Have No Idea What Happened to Yesterday)

We had been traveling for over twenty nine hours to get from LA to Singapore.  But all of the Ubers, taxis, TSA security pat downs and planes were completely worth the effort to get here.  Singapore simply put, is spectacular.  It is a beautiful clean, metropolitan city that honors its history and diverse cultures.

The journey was relatively painless on Qatar Airlines. We left LA on a Wednesday and arrived Friday morning.  Somehow we lost a day but no worries.  We’ve never flown with Qatar before but would happily fly them again.  The courteous staff, tasty food and extras such as socks, headphones and entertainment system made for a comfortable journey.   We flew coach but had isle seats, a quiet plane and no annoying captain announcements about where we were flying over.  On the second leg of our flight I was sitting with a mom, her five year old and the most adorable six month old.  I held the little one to help her out and they were the best behaved children anyone could ask for.  I slept well on both flights.

By the time we arrived in Singapore I was well rested and ready to explore this beautiful city.  My poor husband had not slept but after a brief nap in our AirBnB he was ready to go out and show me the city.  The weather reminds me of Florida, hot and muggy with frequent afternoon rains.  We bought an umbrella that doubles as a walking stick.

Chinese New Year The Year of the Rooster

We arrived on the eve of Chinese New Year.  We explored Chinatown did some shopping and had some delicious food from the hawker stands.  The area was packed with people anxious to celebrate the new year.  Stands were selling Chinese herbs, mandarin oranges, decorations and many items to celebrate The Year of The Rooster.  The streets were brightly decorated with colorful orchid lights, lanterns and giant roosters.  On the stage there was music, dancing and at midnight fireworks.  When visiting family and friends the Chinese custom is to bring an even number of mandarin oranges to wish one another an auspicious new year.  At the visitors center we were given oranges and welcomed.

Streets in Chinatown decorated for the new year

We had some delicious dinner at the hawker stands, but chose not to have the dishes that included live frogs since we are not really adventurous eaters.  We left Chinatown at about two in the morning and the streets were still bustling.  As we walked back to our flat from Chinatown, we noticed even at this hour men were cleaning the streets from the celebration making Singapore a very clean city. 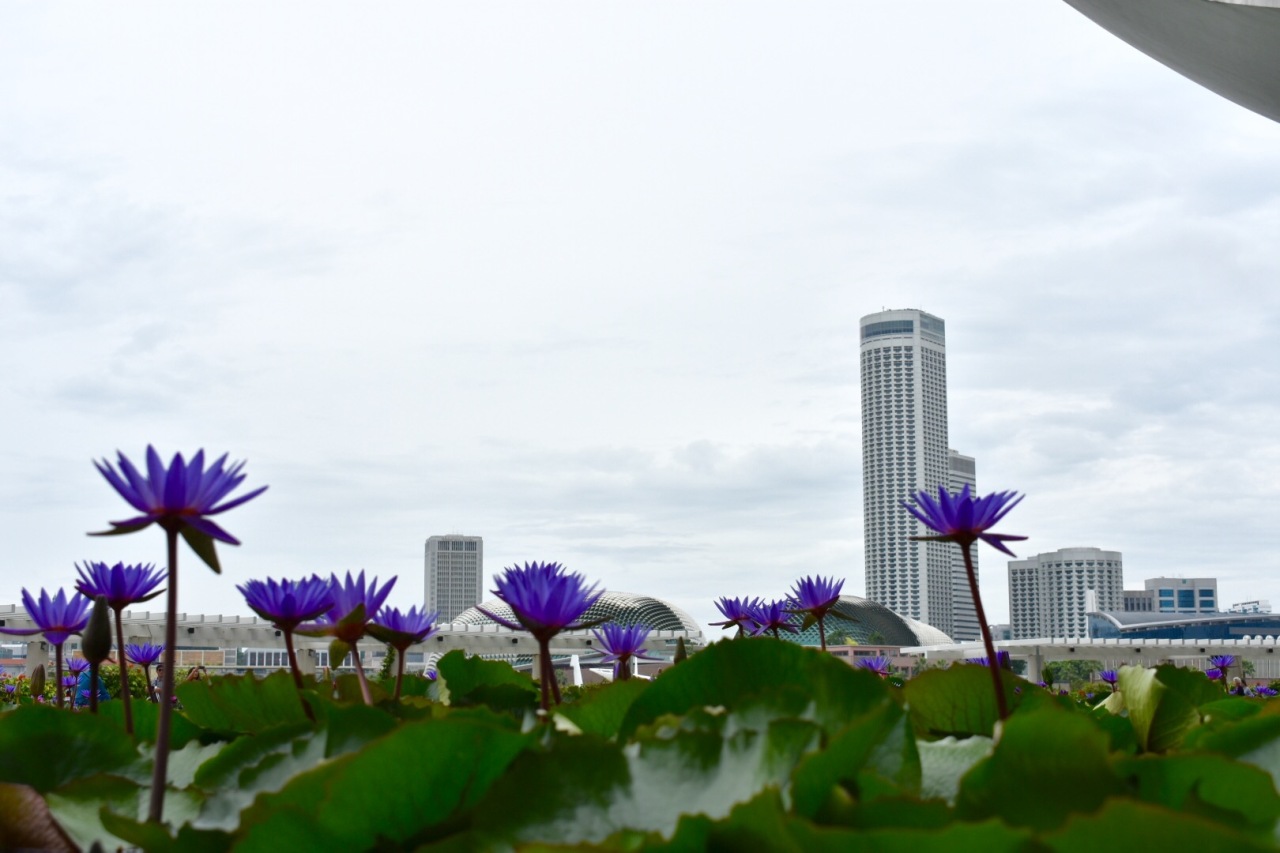 City view from the marina

This week we have visited Orchard Road, where high end shopping is at its finest. Because we love to travel I spend my money more on experiences than on things.  We did stop for some snacks and drinks.  Apparently its a good idea to check prices before you order or you end up paying $20 for a glass of pear cider.  But it WAS really good cider.

We had the opportunity to enjoy a neighborhood dragon parade.  All of the kids had a chance to try on the costume and witness the dragon dance.  The best part of the parade was when they handed out confetti rocket launchers to everybody, including the three year olds.  Nothing says celebration better than an explosive in the hands of the three year old.  The neighbors were so friendly we really felt like we were part of the community.

Dancing dragons and children playing with explosives, so much fun to celebrate

Colorful confetti exploded all around

We went to the Gardens by the Bay and enjoyed the beautiful flowers and visited the Marina Bay Sands Hotel and Shopping Plaza and the Float at Marina Bay.  There was a carnival like atmosphere.  Lots of families waiting for fireworks, and enjoying various “Fair Foods” like deep fried Oreo cookies, ice cream and squid on a stick.

View of the Maria Sands Hotel 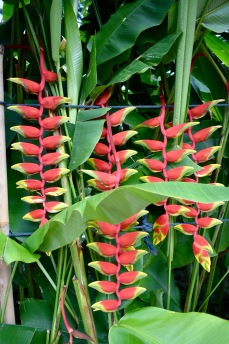 We love Chinatown for its food, shopping and overall active vibe.  They offer a Fish Spa treatment, where you place your feet in a tank and a bunch of fishies nibble on your skin.  The experience is worth the $30 and feels pretty good.

For dinner one night we went to Mama Chong’s to enjoy a Singapore specialty, Chili Crabs.  They are a pricey item,  about 40 bucks a serving, but well worth it.  The local beer here is Tiger and it is delicious, a nice combination of a mild yet slightly sweet beer. 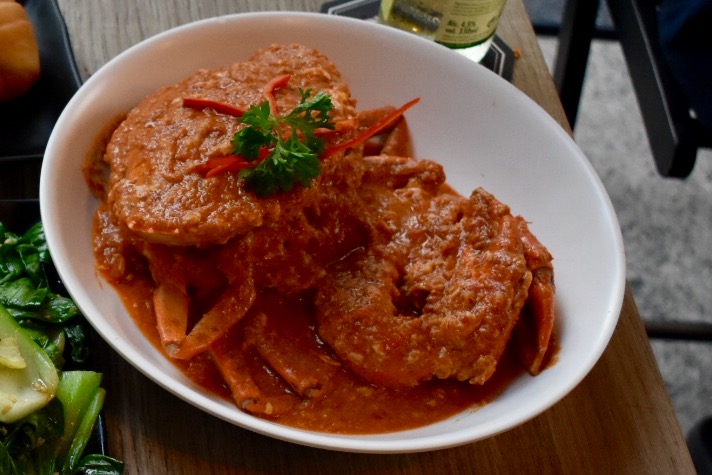 We rode the Singapore Flyer, a giant enclosed ferris wheel.  The views of the city, the bay and the night sky were phenomenal.  It cost 33 bucks each but the pictures and experience were unforgettable.

Inside view of the Singapore Flyer

Get a MRT Pass to ride the incredibly clean and efficient subways to almost anywhere in Singapore.  It is well laid out and all of the signs are also in English. 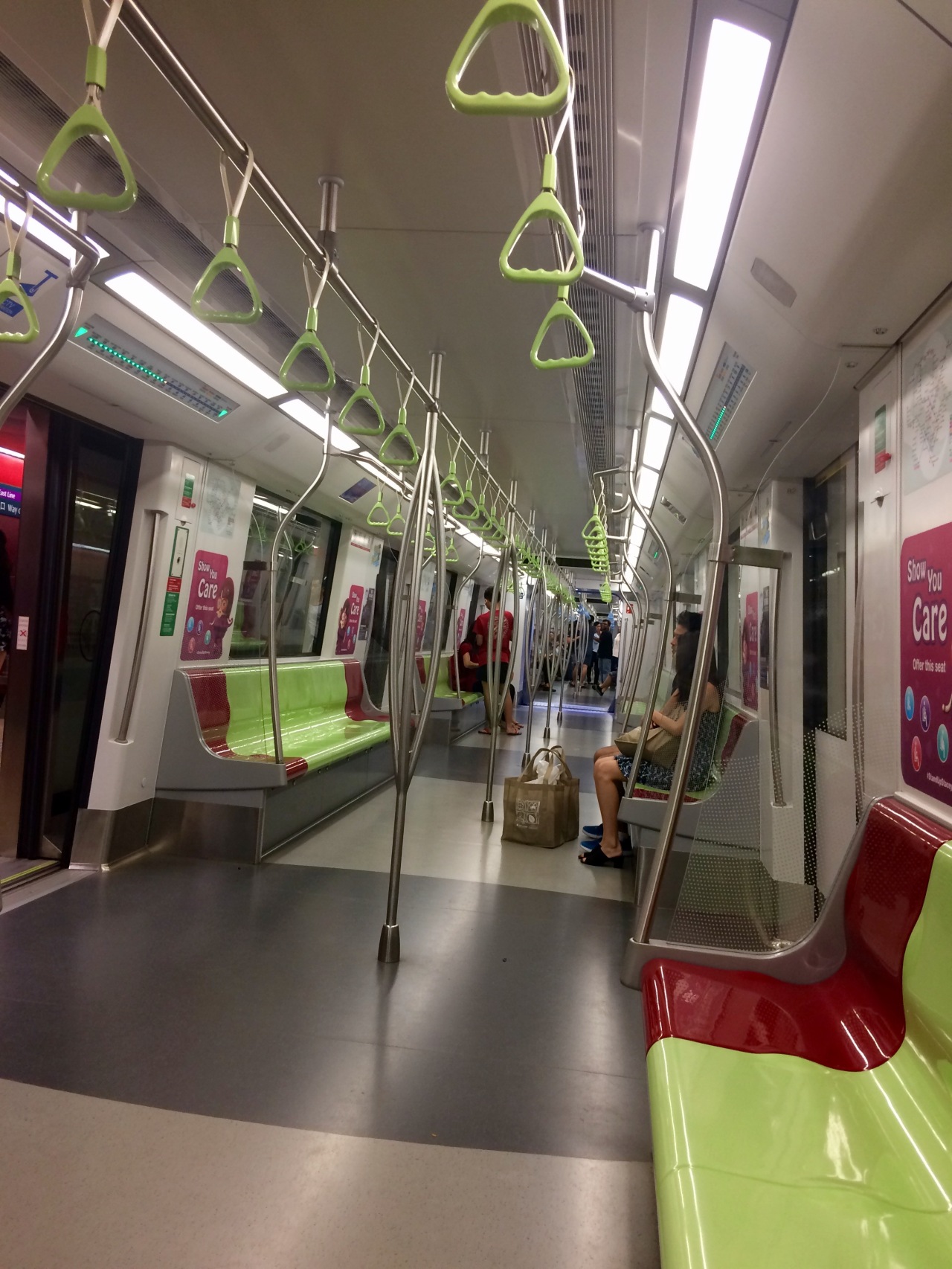 I can not leave out the body and foot massages we treated ourselves to.  I had a sixty minute body massage followed by a thirty minute foot massage at Joneling Chi Spa.  My Fred Flinstone feet always hurt, but following my foot massage they were feeling fine.  During the body massage I was pretty sure that the ninety pound girl was accompanied by a three hundred pound suma wrestler.  All I know was that at some point she was straddling me and somebody was doing handstands on my back!  I was being massaged by her hands AND her feet.  I consider a massage a wrestling match, where I am loathe to “tap out” no matter how uncomfortable I might feel.  When our massages were complete both Greg and I had smiles on our faces and said we had never experienced anything like that before.

View from the Singapore Flyer