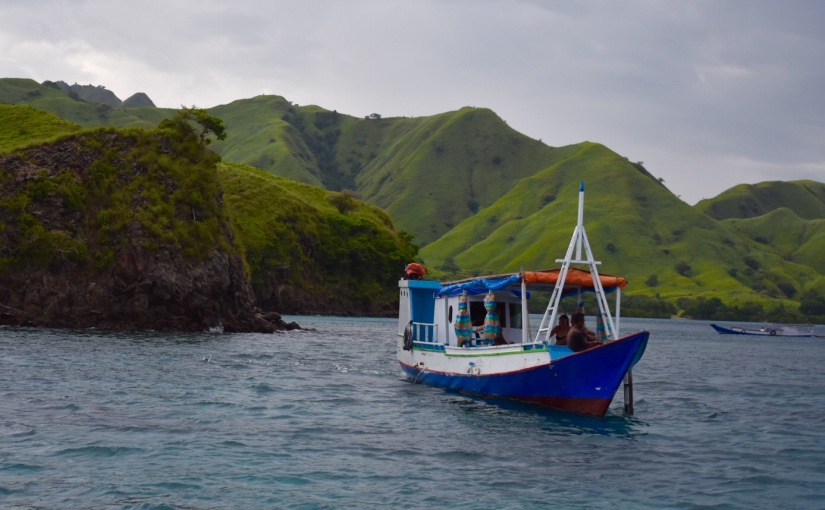 Our cruise ship, Azamara Journey stopped at Komodo Island.  It was a rainy day but we decided to continue to our excursion without umbrellas or jackets.  Along the way we passed some other beautiful islands in Indonesia.

We joined a tour with Go Komodo Tours.  Komodo Island is a national park, but because of the inhabitants, entrance is only permitted with a guide carrying a very large stick.

Komodo dragons are the main inhabitants of the island.  They are the world’s largest lizard, they hunt their prey in groups and kill  with their bite and poisoinous saliva.  As we are walking into the jungle, it looks and sounds like the beginning of the Jurassic Park movie.  The ranger explained to us about the habitat of the Komodo dragon and their diet of birds, wild boar, deer and an occasional tourist.

Not far into the tour I began to question my sanity.  I really don’t like lizards, scary jungle and being eaten up by a dinosaur.  Our guide did take us to a Komodo dragon and we were able to get a great pictures with him.  After viewing a few more komodo dragons, we hit torrential rains.  We exited the jungle and boarded a small covered boat where we enjoyed a delicious lunch provided by our guide.

Next we took off is very questionable seas to a magical pink beach.  The local water taxi service of a ten year old and his dad provided us with a lift to the beach.  The water taxi was powered by what looked like an old lawn mower engine.  We boarded the risky boat, knowing we were strong swimmers and headed to the beach for some great snorkeling.

Following two days at sea we arrived at Darwin, Australia.  We booked a tour recommended by people on Cruise Critic with Way Outback Tours.  We had a lively group of Canadians, Brits, Aussies and Yankees.  Together we toured Litchfield National Park in the Australian outback.  We saw beautiful scenery, got close to several huge termite mounds and had the opportunity to taste the local ants, which were reported to have a lime flavor, oh hell NO!  The termite mounds are made with the poop and saliva of the termit.  No, I do not wish to touch the mound either.

For me the best part was the captivating waterfalls.  We hiked a bit more in yet another downpour, but this time we were smart enough to bring an umbrella.

After the tour we were treated to an Australian barbecue and took some pictures of the wild wallabies.  Everyone was then given the opportunity to hold a “children’s” python.  I did hold her but was not too happy about it.

At the end of the tour we were all wet, well fed and I, for one was happy to not see any more bugs.

I hope to share my passion for travel, food and meeting new people as we travel the world. My husband and I are retired and with time on our hands I hope to discover new places and people in this wonderful world and bring those stories to my readers. Please follow as we ramble about. View all posts by Retired Rambling

4 thoughts on “Dragons,Termites and Snakes Oh My!”