I Am My Husband’s Apprentice

Follow me on Bloglovin’
I am married to an engineer.  He fits the stereotype of an engineer.  The spreadsheets, the planning, the precise measurements, typical analytical mind, that’s him.  I on the other hand rely on instinct rather than logic or knowledge.  Being impulsive and flexible was an asset when teaching preschoolers.

Recently we decided (after much persuading by me) to put up a reclaimed barnwood wall.  I’ve seen them everywhere on television and in decorating magazines and thought it would look perfect in my dining room.  Greg, my husband needed to be convinced, but eventually I wore him down with the promise that I would help him with the entire job.  How hard could it be?  It’s just some rustic wood nailed up on the wall, right? Not exactly. This is where that engineer brain conflicted with my spontaneous style.

First stop was to pick up the barnwood.  We ended up picking boards from two different locations to get the colors and textures I wanted.  These were pretty rough boards, uneven, bowed, and various lengths and thickness.  Next, we visited Home Depot for goggles, ear protection,  liquid nails, nails for the nail gun and gloves. 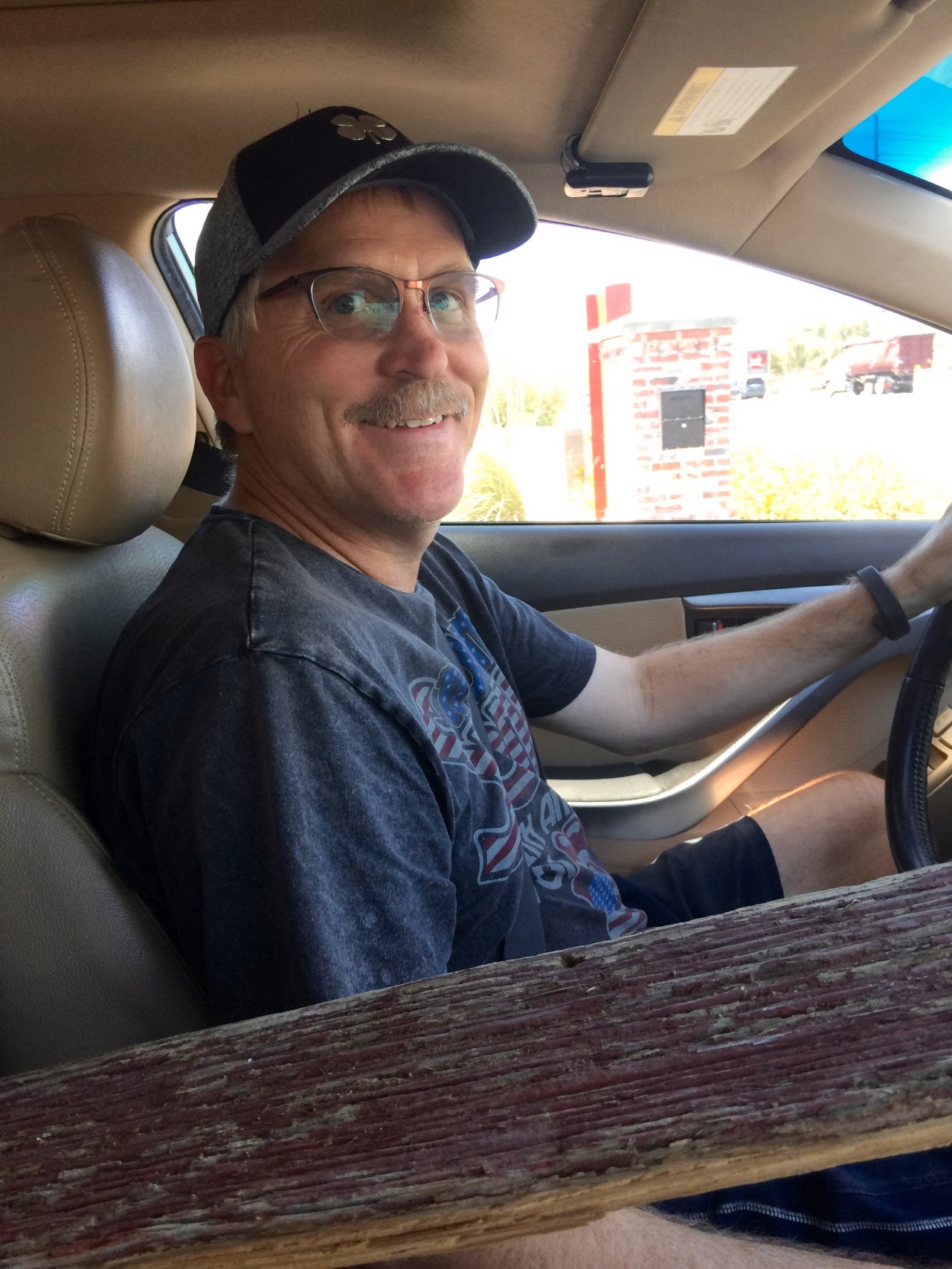 Driving hom with the barnwood, he looks happy now

With the supplies in hand we were ready to begin the project I thought.  Not exactly.  After watching a couple of YouTube videos we determined that we should paint the wall black before hanging the wood.  Back to Home Depot for more paint and then we begin.

Greg wanted to make sure every board had a smooth edge, so we ran them through the the joiner, a machine that takes small around of wood off of the outer edge of a board.  I wanted the design to look a certain way, so we laid all of the wood out on the garage floor in the pattern that looked best to me.  Greg would have been content with all gray wood, but I was not going for that.

Beginning to lay our the pattern for the wood wall

While Greg was using the joiner I began painting the wall black.  Since nobody will see it my paint job was less than perfect, but served its purpose.  Basically, it hides the knots and holes in the wood from peaking through.  Once he was finished with the joining, I thought we would start slapping up the boards.  No such luck.  Greg meticulously measured and cut the boards for the bottom row.  He wanted to have three board, two board row combination but I convinced him that random lengths looks better. 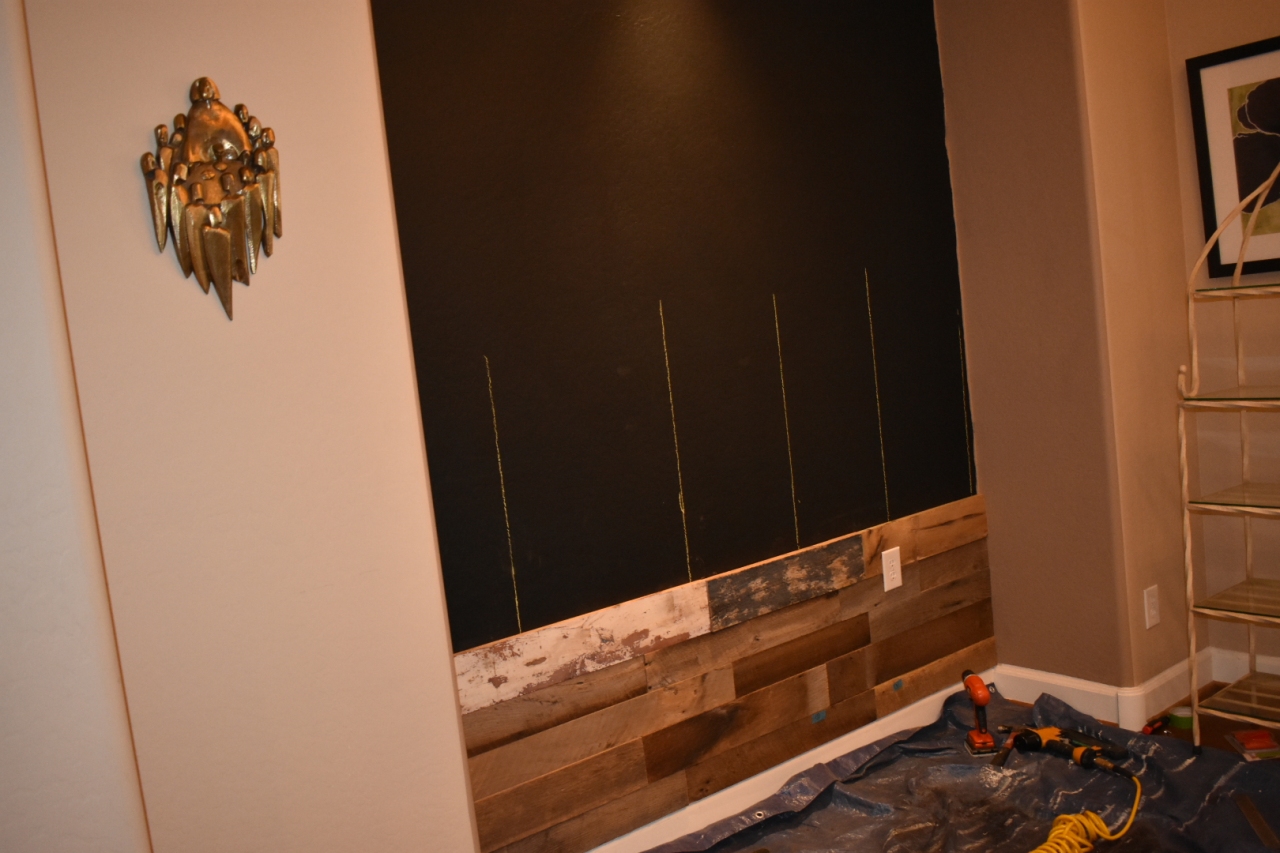 The wall is starting to come together

He was not happy that some of the boards were thicker than others, or that some were warped, very splintery or just plain ugly.  He originally wanted to run all of the boards through his planer so they would have a uniform thickness.  I helped pull a few boards through the planer, mumbling under my breath the entire time “how the hell is this rustic?” Eventually we came to a meeting of the minds and did it my way AND his way.  I was fine with him joining the edges of the boards, because that made him happy.  But I eventually put my foot down and said I like the imperfections with the various thickness of the boards.  He relented.  Together we cut boards to size.  I handed him the nail gun and any other requested tool.

For every row he used liquid nails, the nail gun and the level.  And chalk.  Why chalk you ask?  We needed chalk to mark the studs.  Greg has a stud finder but since he didn’t trust it completely, he had to nail into each presumed stud to ensure the stud finder was correct. 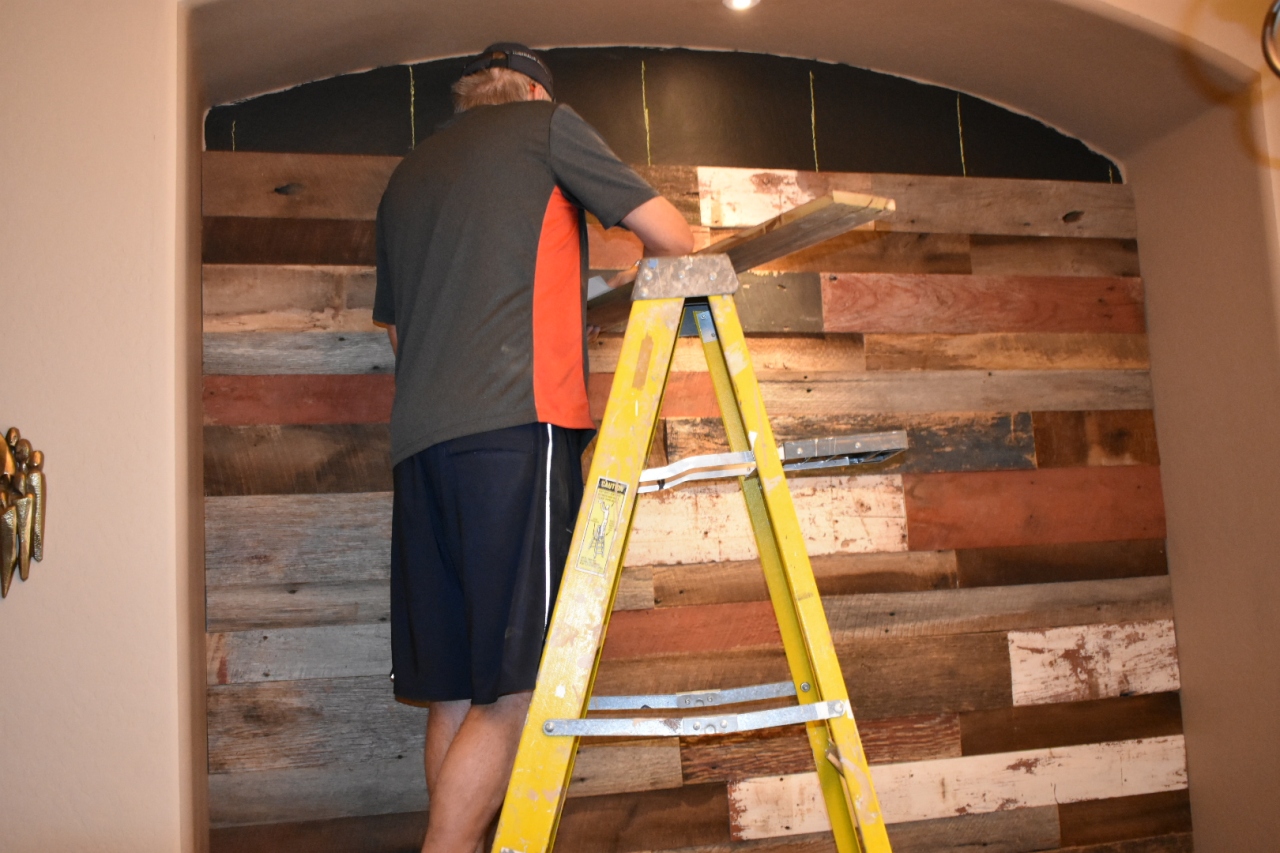 Near the top of the arch we discovered the builder’s insert was not square, oh no!

I thought this job would take two days max.  It was closer to a week to completion.  I love how talented my husband is with his woodworking projects.  I am happy to give him my creative suggestions. But he can have the garage with the loud tools, splinters and sawdust everywhere.  I’m happy with my painting and giving him project design suggestions.